There’s something about a Valentine’s Day Wedding that melts your heart- and all the better when it’s a High School Sweetheart Romance!  Christy & Matt met during their high school years but it wasn’t until after that the romance sparked!  Seven years later, Matt popped the question!  With a strong foundation, Christy & Matt wanted to create a party that was simply classy with the motto, “less is more.” And they did just that. Simply chic & romantic. Don’t you just love the soft palette?

These two lovebirds tied the knot at St. Zachary Church- where Matt went to school, so it seemed like the perfect place to say, “I Do”.  After the ceremony, guests headed to the reception held at the Westin hotel in Itasca. Sharp accents of black popped against the romantic draping of the surrounding reception tent.

Crisp black and white with blush pink and bow tie accents, this chic and classy wedding is all sorts of romantic. We absolutely adore their aesthetic- so fresh and modern, yet classic & romantic, all in one!

Matt & Christy’s Wedding is the epitome of a classic black tie affair! An elegant aesthetic with heart-warming, personal touches; we are completely smitten with the result.

In addition to being one of the most romantic days of the year, Valentine’s Day is also THE largest floral holidays of the year! Christy & Mark were having difficulty finding a florist to design their wedding, “We could not use a florist because Valentine’s Day is a very busy day at the flower shop… [Jasmine was] the best price around and [they] were still able to give me exactly what I had envisioned!” Half of her tables featured a crisp, black candelabra base topped with a pomander ball filled with soft whites, nudes and blush tones. Christy had always envisioned roses for her wedding, “roses and only roses!” she tells us. Availability was limited around Valentine’s Day, so our designers suggested mixing in other soft, romantic flowers such as hydrangeas, carnations, and even some ribbon bows into her arrangements to complete the look. The rest of the tables featured the full black candelabra ensemble surrounded by smaller carnation, rose, and ribbon pomander balls. The end result coordinated perfectly with her classy, “less is more” aesthetic! “My grandmother told me she thought it looked like something out of a movie!”

Christy looked effortlessly beautiful in her Jasmine lace stunner!  It was the first dress she tried on and was instantly captivated with its vintage lace, gold-esque tone, and flattering silhouette, “When you know, you know, you know?!”  She paired this lacey number with a classic fur, adding an element of warmth and sophistication to her overall look (and much needed this past winter! BURRR!)  She accompanied her look with black accessories and little white bow tie earrings, bringing the theme full circle!  Standing by her side, her lady loves looked absolutely fabulous rocking one of our favorite styles & trends- mismatched bridesmaids!  Paired in the ever-so-flattering, B2078, her girls got the honor of choosing between shades of pink or nude, creating an eclectic and unique contrast to the wedding party!

But beyond all of the bow ties and fresh blooms, this is a story of two people who prove that love will always find its way.  When it’s meant to be, it’s meant to be.   Check out images from this adorable duo’s wedding below. Now let’s dive into the good stuff- From the bride, Christy: “Matt and I first met in High School. However, we didn’t start dating until about 8 months after I graduated High School (he is a year older than me). Neither one of us went away to college right away, so we ended up running into each other at a party. After the party ended, Matt so graciously invited everyone to his dad’s house. And that was that, we started dating the next day. We did not make it exclusive for about another two months, making our dating anniversary February 10, 2006. By the time we got married we had been dating for eight years! It is hard to remember what it was like in the beginning. But I do remember feeling like this was going to be something that will last.” The Proposal: “It was exactly like it should have been. We are not flashy or over the top people, so it was perfectly simple- just like the two of us.

I had just gotten back from a three week work trip and missed our anniversary. Matt said we were going out to dinner and picked me up. Before we went out he said he forgot my anniversary gift at his house, so we had to make a stop there. He made me come into his room where there was a big box sitting on the bed. I opened it up to find pictures of us throughout our dating relationship, tickets to events we had gone to, and all of my cards that I had made for him for birthdays, Christmas, anniversaries, etc… At the bottom of the box was a ring box with just a note inside that said “happy 7, how about another 70?” And Matt got on one knee and held the ring out to me and asked if I would marry him. I said “is this real?” and once he said yes it was really happening, I said YES!” Final Thoughts: “The whole day went perfectly, but fast. It was honestly all a blur. I try to remember the day and picture the images in my head instead of actually being there. I recommend taking a step back at some point during the night with your husband and take it all in. We did not do that and I really wish we had. Other than that, the entire day/night was a blast. Getting ready was so much fun. How often do you have all of your closest friends in one room getting pampered and then going out? It was great. Then we went to the church, I got married to my best friend, then went to a huge party where everyone was there to celebrate us. It doesn’t get much better than that! I do think that the honeymoon might have been my favorite part, though. Only because we got out of the terrible Chicago weather to Aruba, and it lasted a lot longer than the wedding day.” 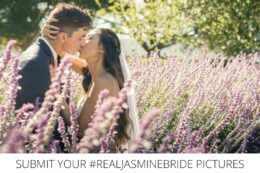